What happened to my sweet baby boy????

He was such a good little baby, funny, giggles, messy, busy, active.  All the typical toddler things.  Well Holy Moly something has happened to that child in the last 2 weeks and he really entered what I have heard about THE TERRIBLE TWO'S.  Really???!!!  I think that my house has enough with Autism and all that brings,  throwing this new 35 pound 35 inch tall terrorist into the mix is really pissing me off.  Why does he find it necessary to throw a tantrum over EVERYTHING????  The high pitched screech that comes out of him somehow always manages to find and fray my last nerve.

I try to remove the triggers, and I don't let him get to hungry, angry or tired to minimize the effects of this.  But the little monster thinks that it is necessary to throw a tantrum because a commercial is on or I can't fast forward the DVR fast enough.  He throws, and he bites, and he hits ME!!!   And CPS frowns upon hitting him back, so I don't.

I know that this is not a permanent state of mind (It flippin' better not be permanent or he is getting taken to the dog pound).

I remember my sweet little cuddly boy, that would giggle when we sing "Head, Shoulders, Knees and Toes", not he says "NO" and covers my mouth.  WHAT IS THAT????? 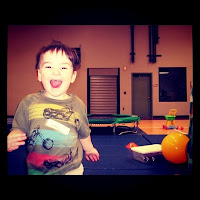 I do so love him and when I get home from work in the morning and he comes running for hugs and kisses it makes me forget these hour long episodes of torturous crying for no good reason.  He is a sweet little guy and a complete ham.  This new personality trait of trying to exercise his independence and all that other psycho babble is for the birds.  I miss the little baby that is all giggles and fun, and was a pleasure to lay down with for a nap.  Going down for a nap or for bed is now a battle of wills, mine vs. his.  (I'm losing).   This little gremlin that runs away from the park and makes me chase him, and that throws his sippy cup at me when he is finished, and heaves an entire plate of waffles off of his high chair has a limited amount of time to shape up.  I don't really know what I'll do if he doesn't shape up, but I really feel that as a parent I have lost control of the entire house to a 2 year old.  Ahhhh

Honestly, I never thought I'd say this, sometimes Autism is a pleasure compared to this nightmare. (It really isn't but I just listened to nearly 2 hours of crying)

God, if you're listening, please bring back my Jackson and remove this monster that has taken over his body and mind :)

Rebecca
Posted by RealMomofOC at 10:37 PM