I am a mom of 2 boys with Autism and one of them on the more impacted side of the spectrum.  Because of a mostly ignorant, unhelpful and inadequate healthcare system and medical professionals, I am as many autism families are, constantly on the research path to help our kids with other co-morbid diagnosis they suffer from.  Because "that's just autism" isn't an acceptable answer when your kid is suffering with:

There are doctors that are willing to help kids with autism they are few and far between.  Medical treatment for kids with autism is grossly inadequate and borders on malpractice for the most part.

My 12 year old is more severe, non verbal, and has suffered from many other symptoms that multiple doctors have never wanted to get to the bottom of, but they basically wanted to medicate him to the point of him being a "thorazine shuffle" kind of kid, to keep him and me quiet and out of the doctors office.  When he was 5 we were in a very bad way, his behavior that was mostly self injurious continued to get bad to the point where I feared for his safety constantly, and the only help that I was offered was anti-psychotics from Neurologists and Psychiatrists.  My gut told me this wasn't right, but my physical exhaustion and emotional state won, and we elected to put him on Respirodol.  What a nightmare.  The relief it brought him, was not near the side effects, and the more I did research the more I realized I did the wrong thing.  This was no solution for him.

I AM NOT A DOCTOR AND AM NOT SAYING TAKE YOUR KIDS OFF OF MEDS,  FOR MY SON IT WAS NOT THE SOLUTION.  MEDICATIONS ARE NECESSARY FOR SOME PEOPLE.  BUT SEEK YOUR OWN MEDICAL ADVICE.

I had seen a segment on 60 minutes about Charlotte's Web Hemp CBD oil and the miracles it was working for people with Epilepsy, Apraxia, Autism and Cancer.  So I ordered some, this was before it was legal in California, so I could only acquire it from the grower in Colorado, and it was pricey.  But I always will try anything once.  While the results of this product I tried for about 6 months were not what others got, there was still some benefit to it.  The best way I can describe it is that it took some of the "Steam" out of my son.  He wasn't tense, his vocal stereotypy was decreased, his screaming decreased, his pacing decreased.  For us it did not bring language, sleep, or cure his autism.  I was a little disappointed and felt I was sold some really expensive snake oil, but was happy for those who it brought a complete benefit for.I didn't continue this brand, because the benefit vs. expense wasn't working for us.

In late 2016 my son was involved in an accident at school and suffered a traumatic brain injury after a file cabinet fell on him (don't even ask - but sheer stupidity, selfishness and a lack of common sense were the cause).   But moving on, this injury caused me as a mom to dig deep, I was hurt, scared, angry, and disappointed in EVERYONE.  This was the period of time where we learned first hand how absolutely neglectful and incompetent medical personnel were. This was were we experienced people in medical, legal, education and our community that the attitude was that because he had no voice, he had autism, that his life had no significant value.  That was the hardest biggest and most sour pill I have ever had to swallow in my life.  Time heals all wounds, but leaves scars for sure.

The symptoms and all that come along with a grade 2 concussion, are no joke, and don't go away with a pill or a visit to the doctor and a vaccination.  My son suffered a loss of skills - life skills that we had acquired over the years, loss of potty training at 9 years old, loss of the ability to make full sentences on his communication device, migraines, vagus nerve damage, insomnia, PTSD, anxiety and self injurious behavior trying to alleviate his own headaches.   He spent the better part of 2 years in his room in the dark mostly crying. The Concussion Clinic at Children's Hospital Orange County denied him as a patient because of his autism (after waiting 7 months for an appointment) - their reason was they couldn't get an accurate assessment on him because he couldn't talk.  It was complete horse shit, they just chose to discriminate on a case that would cause them to actually have to do work other than prescribe a pain pill.

In the midst of this absolute shit storm of symptoms Post Concussion Syndrome was ruining us, it was painful, stressful, and we were utterly on an island alone.  One day we were at Disneyland with another family, and my son lost his mind, it was anxiety, panic attack, pain - and you just don't want that to happen at Disneyland for the sheer crowd factor, you can't get out, you can't get help, and every loser this side of the Mississippi River is staring at you, without offering a single ounce of help.  Our friends who have a son who was going through a medical issue offered us some CBD Tincture oil to help.  40 minutes after taking the oil, it brought relief, relief, visible change in his attitude, body, mind and soul.  Not like what I had seen before, where it just sort of took the edge off, this was actual relief.

I was given a huge shot of hope, and the rejuvenated belief that there was something that would relieve his pain, anxiety, and trauma.  So after I picked myself up, brushed myself off, I found a new resolve and gratitude and the energy and stamina to help my son, rather than just survive his injury, pain, and trauma.  We had a little bottle of oil, and it changed everything.  EVERYTHING.  The brand we had used was Papa & Barkley 1:30 Tincture Oil - It is 30 parts CBD oil, and 1 part THC.  This oil seemed to have the kick that we needed neurologically, physically, and emotionally to bring a kind of comfort to him that we had never seen. 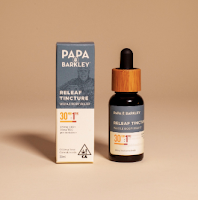 In the year we have been using CBD on our son, he has been relieved of most pain, the migraines were cut in half almost immediately, anxiety is much lower, gut issues are being alleviated, and sleep OMG SLEEP, finally after years.  And all of this with no side effects, he doesn't get high, his blood work is super clean, no pre-diabetes like the Respirdol had brought on, no sweats, no dry mouth, none of the other crap that heavy duty pain killers and anti-psychotics bring with them.  The only think mainstream medicine offered was a prescription pad and medications that were completely inadequate and inappropriate for a child suffering.  The pharmaceuticals left him drooling, constipated, and quiet, which then doctors would say, "well this is all we can do, it is severe autism, you need to accept this Mrs. Goddard" BULLSHIT - would anyone accept that for their kid?  Why was I expected to because he couldn't talk?  Papa & Barkley gave my son a mostly pain free life, free from anxiety (for the most part), it allows him to sleep through the night about 90% of the time.   When I added Chiropractic care into his repertoire with the CBD we had the game changer.  The adjustments from Gravity Spinal Chiropractic and the care from Dr. VanSeters was sincere, frequent, and good.  It added to my childs recovery, and brought comfort, contentment and extrication from the grips of Post Concussion Syndrome and some of the more severe aspects of Autism.

My gratitude exists on many levels for this discovery, because I think when I did find it, I was just days away from completely giving up on
him, and accepting that his life was more screwed and sad than it was with just an autism diagnosis.  This is just our experience, this is in no way intended as a medical recommendation for you.  This is our experience, strength and hope for families with Autism, who have basically been locked out of good care, because of Autism.  This helped us, it brought my son comfort, it alleviated his injury, and cracked the shell of autism, where we can and are able to bring further recovery and he can come out of the dark.  Thank you Dr. Brandon, and thank you Papa & Barkley, and thank you Mrs. Lopez for sharing the oil with us on that fateful day at the Happiest Place on Earth.

Posted by RealMomofOC at 9:21 AM