They Said He was Unteachable

I relive that day in our IEP meeting with my son's "team", as a 1st grader I was told by several, he was unteachable, unengaged, and unwilling to cooperate, and I should consider taking him out of school.  He was 6/7 years old then, and I was riddled with anger and heartbreak.  These were EDUCATORS, and they were giving up on a little boy with autism, because he couldn't talk.  Because he didn't fit in the box of the neurotypical child that they determined worthy, nor did he fit in the much smaller box of autism that they deem acceptable to teach in their ONE way that they offer.

You suffer these blows from educators, medical professionals, and many in the community often as a parent to children with special needs, especially parent of children that have no physical voice or functional communication.  They expect you to accept their mediocrity, and one way style of teaching.  They expect you to take their lies and laziness as "we're doing everything we can".   They also expect you to accept them not treating your child with dignity and respect because they have no voice, to tell you that the professionals, teacher and therapists are killing their souls and not presuming competence.

I am going to say this that there are A LOT of AMAZING SPECIAL EDUCATION PROFESSIONALS, and we have been honored to have them.  I am not ignorant to that fact at all.  We have been blessed with some teachers that have brought my son back from the darkest place, after years of being warehoused, marginalized, neglected to the point of being put in the ICU.

I have been tired of the overplayed excuses from teachers and therapists with all the things he CAN'T do.  They never gave him a chance, offering him a whole 15 minutes of speech, including walking time.  But I digress.

As a mom, you have the PhD on your kid.  You do.  I do, I barely made it out of high school, but NO ONE knows my kids better than me, no one knows when he crinkles his nose what is about to come, when he cocks his head to the left he's happy.  He hates the back of his head being touched, but he loves his forehead being rubbed.  You just know your kid, because they are a part of you.  It did take me awhile to get my Autism Mom Wings and fly with them, but once I did, the world became so much more open and available to him.

I have followed moms who have walked this treacherous, exhausting, exhilarating, and overwhelming path before me, and if I see something working for their child, I bother them, I ask them, "what did you do?", "can you help me?", "where can I find that?"  "What is my next step?"  The kids, the kids have always been my evidence, and all I need really to be willing to try new supplements, diets, methods, treatments.  If it's working on kids in my circle and I can do some research and see it's working for others, we have nothing to lose to try something.

We have embarked on this new journey for about a year, and I finally feel like I have my wings and I can sort of fly solo with it.  We are doing a program called Rapid Prompting Method which is used to teach academics, and communication is also taught in the process. Despite behaviors, the academic focus of every RPM lesson is designed to activate the reasoning part of the brain so that the student becomes distracted by and engaged in learning. 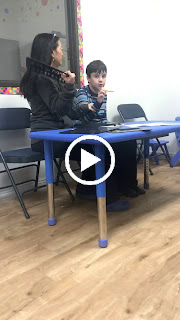 RPM is distinct from other methods as it is based upon how the brain works. The aim is to bring the student to maximum learning through the open learning channel and to elicit the best (not simply to test) out of the child to enable maximum output in that given time. As a student's cognitive and motor proficiency increases, the sophistication of a student's response also improves.
RPM uses prompting to initiate a student's independent response, without physical support. In addition to teaching letter-chart pointing, RPM also utilizes stencils and other drawing exercises to lead to independent handwriting.

In a nutshell, I just have to say to all of those at those IEP meetings who said, he was not teachable -  YOU WASTED A CRAP TON OF MONEY ON YOUR DEGREES.  YOU ARE WRONG, and YOU OWE HIM AN APOLOGY!   This kid has chops, he knows stuff, he has absorbed more than you can even fathom.

For example for fun tonight we did a few lessons - here are some of the questions, and his answers.

What part of the body does a rattle snake shake to make noise?  -  a T-A-I-L (so he knows the answer and how to spell it)

If you are watching a sunset, are you facing East, West, North or South?  W-E-S-T

Name the Tallest Mountain on Earth - Everest or Whitney?  E-V-E-R-E-S-T

He knows stuff, a lot of stuff, different stuff, how to spell, he has opinions, I was told his functional communication would be just communicating his needs for food and toys.  Boy did they underestimate him.

UNTEACHABLE - that's what they said.   Well this journey we are on is now about to soar like a rocket ship.  I hope you follow along in our journey.  This is the part where I get to say It's Not Game Over because of Autism, It's GAME ON!!!

Posted by RealMomofOC at 9:29 PM