A Tale of Two Autisms

The new CDC autism diagnosis number that came out is 1:36 kids is diagnosed with Autism.  I have Two with Autism. Two boys, two autism diagnosis, many many needs, very different needs and very significant.  It's enough to make a person go crazy, cry, laugh, and go through a myriad of emotions that could get you diagnosed as koo koo for coco puffs.  No lie. 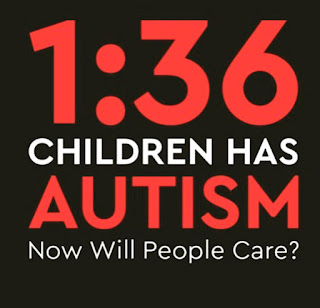 My younger son was diagnosed with Autism at 2.  He had delayed speech, and Atypical autistic  behaviors which met a criteria consistent autism.  He was put into early intervention therapy ABA, speech and OT and it helped move him a long, not long he started using words, then sentences, and playing appropriately with toys.  Not with kids, but he could be hell on the Hot Wheels Track, he enjoyed that a lot.

It was pretty easy to find things that motivated J to work for in ABA, to find things that he was interested in, to shape behaviors, language, and social interactions.  While I don't think ABA works for everyone, it did and continues to do it's job moving J along where is is able to function in the community and have significant and meaningful peer and family interactions.  Over years, and many many hours of therapies, success, failures, blood, sweat, tears, calls from school to pick up, horrid behavior, obsessive behaviors and all around autism. We have made strides, big, strong, and forward.

We have made mistakes, we have sacrificed, tried, stopped, retried, and had setbacks, and overall we always make some kind of progress, not perfection, but progress nonetheless. We are at that point here, where I am making the big leap of faith and putting him in activities with neuro typical peers.  Something I should have done years ago but he really wasn't ready.  He has his social issues, but we basically threw him in the deep end of the pool, and I released the reigns a little, and it's amazing.  The elation that comes to parents of children with autism when our kids are able to do things that their typical peers take for granted.  I'm living that euphoria of proud parent, amazed at that kid and how hard he has worked to get this far.

I am also living in the part of how hard it is for me to watch him struggle, see the deficits he has when around his peers.  But there is so much hope and I see a place in the world for him, and that makes me happy.  I just need the world to see his place in it and that is my fear, the world isn't the most comfortable place for a kid like him.  I know that there are bullies, I know that there are teachers that will not understand what he needs to learn, I know that a lot of people won't understand the stereotypical behavior he exhibits when trying to get used to a new place.  But as the number has just grown from 1:36 children now have autism, I pray our world gets it's shit together and understands this.  This is an epidemic, I wish it was considered as such.

My older son F, has the kind of autism, that no one talks about, that no one wants to see, that most pretend isn't there.  He was diagnosed at 20 months.  He is almost 11, non verbal, and his circle of people that love and respect him and understand his is small but awesome.  We had a lot of misguided horrible teaching professionals that were allowed to marginalize him as a human, decide he wasn't worthy of working on academics, put him in a room instead of giving him services he was entitled to like speech and occupational therapy, because one woman determined he was "unteachable", and they couldn't work with a child like that.  Rather than figure out a way that would work for him to learn, they determined after 2-3 sessions he wasn't worthy of their time.

After as severe injury occurred at school he was deemed "collateral damage" in an unfortunate incident.  His injury has been marginalized, "he was severe before the accident, he's still severe, mom needs to move on"  Not even referring to him as a human, because he doesn't have a voice.  It's a hard place to be as a parent knowing that these are opinions

Fighting to have him treated human has been the turning point in my life.  Medical professionals, school administrators, and many people in the community don't understand severe autism and don't want to.  Many Medical professionals won't look past the autism to see what is medically wrong, when their clearly is something wrong.  Constant crying, tantrums and the wailing of pain, isn't just autism, and that is in many cases what we are expected to accept as diagnosis.  The doctors that will look at the severely autistic as a whole patient are rarely covered by insurance and it prohibits many families from seeking that help, and there are no guarantees that their treatments will work. So it's a tough place to be in  as a family.

There are a lot of family events, parties, graduations, weddings, that are very uncomfortable for him to attend, sometimes we can go, sometimes we can't.  Most of our family now doesn't even notice if he shows or not. But it's clear that when he's there it is stressful for others that he is around, so we are now forced to separate and divide as a family, or leave him home with a sitter.  It's sad.  He knows he's being left, he would like to be with us but those events are too much for him in many cases.  We have had some success with him, but you never know until he gets there.

So as a parent of two with autism, there are such highs and lows that come with this parenting, some in the same 5 minutes.  One kid is striving and moving forward in his therapies as he should, the other can't remember where the bathroom is in the house.  We are forced to divide and conquer, we love our kids equally, and both have needs that while very different are very significant, no matter what their abilities are or aren't.  As the latest CDC numbers reflect the numbers of kids diagnosed with Autism as 1:36, it's frightening, its taxing, it's going to crush the systems.  So while my 2 autism's are something.  1:36, is an epidemic, and everyone needs to care and demand that answers happen for this generation.

Posted by RealMomofOC at 2:02 PM No comments: