The little girl has grown into a SOLDIER! 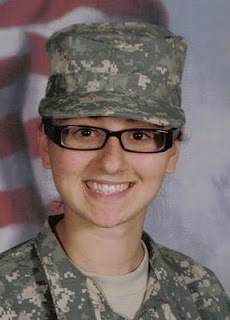 This is Erica, she is my best friends daughter.  In one week this woman graduates from basic training and her job training for the United States Army.  WOW!!!  This was the first little girl I babysat for long periods of time.  It is crazy to think that someone whose diaper you used to change, and dance to Disney songs in the living room is a now a United States Soldier.  I can't even imagine the emotions that her parents are actually going through.

Erica has been a part of my life since I was in my 20's before I ever even considered children of my own.  Her and her brother were my experimental kids.  For the most part I always returned them to their parents in the same condition I got them in.  A few scrapped knees and a little incident with a boogie board in the ocean but all in all we always had a great time.  Erica as a little 3 and 4 year old would ride in the back seat of my convertible gladly wherever I wanted to take her.  The good old days!   I don't know if I would let myself babysit my kids now, if that makes sense :)

I was probably an inappropriate care giver, I did take them to movies that they were much too young for too late at night sometimes.  I let them drink sugary drinks.  One time Erica downed an Iced Venti Latte from Starbucks in about 3 gulps when we weren't looking, I think she was 4.

So the training that I received from Erica and her brother led me to be the mom I am today.  I am grateful for the lessons I learned and having experimental children.

As we all have been through her pre-teen and teen years were a little turbulent, but nothing horrible, and as teens and their parents can't always communicate a little intervention was in order.  I had the privilege of having her stay at my house last summer when I was recovering from surgery and separated from my husband.  It cooled the jets at home and I really needed her here.   She helped with the boys like I used to help her mother.  She was here for me during some dark days in this house when I was not able to do for myself.  At those moments, I knew that this kid was going to be just fine.  She had and amazing foundation from her family, they just didn't always see eye to eye.  But as they say absence makes the heart grow fonder, and I think all that was done before she shipped out is being repaired, and I couldn't be happier for this family.

As I sat in awe of her, knowing that she was about to embark on this major life journey and having the duty of protecting and defending OUR FREEDOM, all I could think of was a little girl that cut her own hair sitting on the beach in Corona Del Mar wanting to know who was going to take her in the ocean.

I am proud to say that I have been part of this little girls life, I can't say little girl anymore, she is a WOMAN, she is a United States Soldier.  I want to take this forum to thank her parents and her for the service to the United States and for raising someone that is selflessly defending Our Country.

As you graduate next week Erica, just know that I will be beaming with pride here in California.

Rebecca
Posted by RealMomofOC at 10:59 PM