They're BAAACK - The Real Trainwrecks of OC - Season 7

Well, I have to say I didn't miss them much because they were pretty boring and predictable last season.  Drag Queen make up, pretentious posing, staged drama, divorce, soft core porn, and dinner parties from hell.  This is what all the "Real Housewives" franchises are, so you really just tune in for the characters.  They have to be characters because I refuse to believe that 40 something (in some cases 50 something) women act like Lindsay Lohan in junior high school.  It is a guilty pleasure I get out of watching 5 women in Orange County try to portray themselves as "Real", when there is nothing real to them.

So after 2 years of vicious cat fighting name calling and slanderous words Tamra and Gretchen are now friends. Um, sure - Bravo we believe that none of your shows are scripted.  OH MY GAWD. "Secret Lovers" as they called it because they are keeping it a secret from everyone.  For the love of God, Gretchen,  Tamra is so mean, nasty and untrustworthy, she has thrown you and every single person on the show under the bus like she is queen of the OC.  You will regret this decision, because Tamra is the epitome of jealousy in the OC, she has nothing and wants it all.  She will take you down to her level.  Don't seek a lower companionship, there has to be better chicks in OC to want to be friends with don't let it be the meanest one in town.

Alexis you filled 3 sippy cups for breakfast and got cereal bars out of the pantry and complained at how hard it is to be a working mom.  I nearly choked.  You have an assistant, you bought your kids lunch at school, and threw some cereal bars in a backpack before your one day of work out of the house.  My goodness woman, how on earth do the rest of us do it.  Oh, yeah I forgot to mention how "glammed" up you got.  I am going out on a limb here, but am, fairly certain the glamming up took priority over the kids breakfast.   Seriously, you really can't think you have it so challenging.  Most of us REAL MOMS work, have no help, and don't spend several hours putting our drag queen make up on before our 1 hour job in San Diego one day a week.  Your life, so stressful, short selling your house in Newport Beach on the tax payers back, whilst in bankruptcy and then buying a beautiful home in Dana Point for cash.  Excuse me whilst I barf, and have no sympathy for "how hard it is" to be you.

I have to go back to Tamra, you said Heather the new housewife is everything Alexis wants to be.  Isn't that everything you were portraying to be in the first couple of seasons you were on the show.  You were all fine and happy with your marriage and big house behind the gates, Rolex's, plastic surgery, tennis bracelets, and yachts until - HELLO - bad economy- you figured out you weren't wealthy????  You were pretending to be wealthy before Alexis was on the show.  Hello - Pot, meet Kettle.  Good Lord woman, be a little less hypocritical and mean and maybe people wouldn't want to knock the hat off your head when you are seen in line at Starbucks around town. 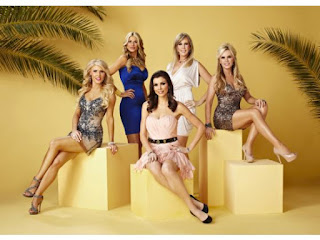 Vicki, well I can't wait to see the turn of events in your life this season.  See the drama self-induced and otherwise that comes with this season.  But Vicki you are so smart and driven.  Why on earth, after seven OC season and a slew of other Housewives franchises would you have a dinner party.  It is clear that anyone that signs on to be a housewife has no class when it comes to dinner parties.  You all act like spoiled, psychotic, attention starved children when invited to some one's home.  Since you are trying to sell yours and all I would think that you wouldn't want your stuff messed up, so I can't wait to see what happens next week when the proverbial poo poo hits the fan at the first dinner party (of the season) from hell on the OC Housewives.

Heather, welcome and stay the hell away from Tamra, she's a jealous Tasmanian devil.  She will turn on you like the Chupacabra.  Can't wait to see the antics you bring to the OC, how "REAL" you are.

So I look forward to another breathtaking season.  And the fact that you women make me feel like such a good wife, mother and friend, the self-esteem boost I get when I look at you all and your behavior is almost as great as the 80 lbs I've lost.

Rebecca
Posted by RealMomofOC at 11:32 AM