This morning I did not want to go out on a run even a little bit, and even less did I want to go into a gym and see actual people. I wanted to get back in bed and just sleep and or feel craptastic.  Seemed like a good thing to want at the time.  But I put my running clothes on, ate a little breakfast, and figured at least the fresh air and sunshine would do me some good.

Perfect temperature and the sun wasn't too bright, so off I went, with the guilt that I didn't take my dogs this time.  You see we have been having these kick ass autism weeks where Franklin is making huge strides in his behavior and potty training is coming a long, he is sleeping much better, eating a little bit more (which is still not much), but he's actually eating so that is good.  He goes to school and is hitting some benchmark goals, things are moving FORWARD, and that was just elating me.  I get elated over little things like Franklin figuring out that tokens are what make the games work at Chuck E. Cheese.  I let that carry me for 2 weeks I was so excited that he made the correlation between the two.  It's making that crack in the shell of autism a little larger which thrills me and makes me feel like Rocky and autism is Apollo Creed.  I walk around like a peacock trying to show how awesomesauce my kid is doing.  Jackson is kicking ass in pre-school, and is hitting goals but has some behavior issues and needs work, but his teachers are crazy excited at the progress he's making in just the month he's been there.

I felt that the burden of autism was lifted a little bit recently and I don't know if I got complacent or cocky or neglectful or what it was, but 2 nights in a row we had "poop" incidents, I will spare the true grossness and gory details. It was a disappointment, and at first I was mad at Franklin, and then I was mad at me for being mad at Franklin, and then I hit the wall.  All I will say is we have been working on potty training for about a year, and poop is a nightmare.  I had it where Franklin would finish therapy we'd put a diaper on him and he'd poop and be done, back to underwear.  I have beat myself up over this poop thing for months.  I have sat in the bathroom for HOURS on end to get him to go, made the bathroom the most entertaining place in the house to be, and many other methods to get him to eliminate in the toilet to no avail.  And there are very few that understand this issue, and no one that I really want to go to to ask them how do you get poop out of carpet, hair, baseboards, it is friggin' embarrassing and makes me feel like a freak and failure as a mother.  I don't even feel comfortable going to other autism moms about it since my recent experience with a mom's group recently, some mom's groups clearly are not safe places and a few people in them are mean and mental (but that is another issue completely). 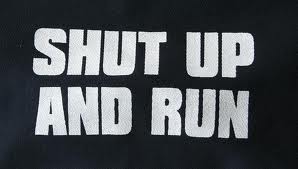 Into my second mile of my run I came to the big realization that since my kids are tortured by autism, I need to help them as much as possible, and even though I am not the best runner, or the fastest, and I fall of the track and don't train right, and have a lot to learn, I need to be a better runner, so I'm a better mother and care taker to them.  I have to be healthy, I have to clear my head, and get stronger so I have the ability to kick the crap out of autism.  And I can not whine because it hurts to run, or I'm bored running or whatever my excuse du jour is, my kids are victimized by autism daily, I can take a little pain, boredom, or crappy weather and just SHUT UP AND RUN.  Take my aggression and anger and sadness out on the road or the track not on my kids, friends or family.

So a new day, a new training schedule and off we go, training for autism and running this OC half marathon in May, for my kids, not for me to show I can do it, but for my kids and only for my kids.  Trudging the road of autism and all that comes with it, the good, the bad, and the poop.


Rebecca
Posted by RealMomofOC at 3:21 PM