Kicking autism in the behind

I absolutely love when my son gets the opportunity to give autism a kick in the groin.  I forget sometimes the struggle that just the small things are for Franklin are to do.  He’s 5 and has no words, the sensory input sometimes is unbearable for him, his eating is compromised because of many issues that we are currently working on, he doesn’t socialize, he doesn’t play with other children, sometimes children don’t want to play with him because he flaps his arms and babbles too much and sometimes still wears a diaper. 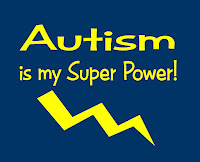 I sometimes feel like I just accept that he is delayed in all areas, and miss the big things that he does.  When I say big, they are HUGE to me, something that your typical child does everyday and you may take for granted, or not even notice anymore.
There are a lot of things that we don’t do or can’t do because the sensory input is just too much and it causes a meltdown in my kids.  Either it’s too noisy, too crowded, a new location, or out of routine, any thing different than their normal structure has the ability at times to make Autism hijack my kids and their behavior and have a field day.
This week a couple hurdles were jumped over that I was so excited about it nearly brought me to doing a cartwheel down the street.  We went to a birthday party at Chuck E. Cheese and last year we went there and didn’t even make it through the door, the noise and chaos was more than his system could take.  I tried it again this week and we made it in the door, he sat on my lap for about 20 minutes with his fingers in his ears, ate his snack, went and sat with the other kids, and shockingly took my hand and led me to the play area.  That was the cool part, but the thing that was so amazing was that he figured out that the TOKENS were what operated the games and rides.  He knew they were in my pocket and put my hand in my pocket to get them out, and put them in the game he wanted to play.  If I could only tell you how ridiculously enormous of a generalization and what a big deal this was for him and me.
It showed me that there is a lot more going on in him that I thought, he understands things that I don’t give him credit for.  He knows more than I think.  Because he doesn’t speak I have to figure out on my own what he does and doesn’t know, and I am learning this week that he is much more intuitive that I acknowledge.  Things are changing and that is exciting.
Mommy needs to let go of the reigns a little and let the boy expand his wings.  I heard the expression about kids with special needs and autism that they have a “learned helplessness”.  Basically, it’s me that is teaching him to be helpless, and I’m not trying to do that, but I want to do things quickly, so I do dress him, I do brush the teeth, pick up the toys, and more things that I can do on his own, I just do it because it is much faster than if I wait for him to do it.
I am going to not always be so rushed, I need to help him grow and crush the shell of autism that his him captured.  We chip away at the shell constantly but he is making such big strides right now, I need to do what I can to help him, and that is going to mean making him do more for himself.  Be the 5 year old he is.  It is not too much to expect him to carry his own backpack in the house and hang it on a hook.  He does it at school, why not at home???  Mommy can’t be the safety net anymore because I know he knows how to and that he is ABLE to it.  He has more abilities than I am aware of, and I don’t want to do my little guys a disservice by doing to much, but I also don’t want to be neglecting their needs.  It’s a fine line of mommy guilt I will be walking but I will have to put my big girl pants on even though it will be tough and let him do what he is able in the time it takes.  I can put on his shoes in 30 seconds, it will take him 5 minutes to do it alone, but he CAN do it and I need to let him.
So take that autism, we will continue to junk punch you and get our kids out of your tight grip!
Rebecca
Posted by RealMomofOC at 12:12 AM