Terrible Two's that no one tells you about

To all you "so-called" friends of mine that had children before I did.  I need to know if I did something horrible to you that you would keep a secret like this from me?  Why would you not tell me that my beautiful chubby little baby would turn into this thing that is beyond monster?  I have heard the phrase Terrible Two's my whole life, I didn't really experience it with my 4 year old, that may or may not be because of his autism.  He was such a great little guy.  However, Jackson has obviously been snatched and replaced with this horrible tantrum throwing, biting, hitting, screaming gremlin.
It's like all those "non-beautiful" things that non tells you about pregnancy either.  The hemorrhoids, gas, ravenous hunger, hip and back pain, pooping when you push, amongst a plethora of other things that would make your head explode if you were totally aware of the enormity of stuff going on with your body.  So people keep it a secret and let it surprise and shock the hell out of the hormonal ones.
So after the shock and awe of pregnancy and throwing a kid or two out of your va jay jay, you get the incredible pleasure of debilitating sleeplessness, a hormonal shift that would kill and elephant, and for and added bonus you get to feel like a hobo most of the time begging for a shower (especially if you have more than one kid).   The soreness of all of your body and sheer amount of times a baby craps in the first six weeks is baffling.  To all you moms that don't tell your friends or prep them for any of this WHY???
Since Franklin was so mild mannered (maybe because of Autism, but who knows?)  So now that Jackson came a long I was and still am not prepared in anyway for the craziness that has taken over a big part of our lives.
If you are the judgement type of person that is going to offer your opinion at how poorly I am handling the Terrible Two's - then please stop reading now.
I am not saying my Terrible Two's are worse than yours or any one's I am just trying to relay how unprepared (and sometimes how inadequate I feel) as a mom I was for this stage of childhood.  This stage is nearly the same type of maternal ass kicker that Autism was in the beginning.  I was not prepared for the screaming the hitting, the biting, the antagonistic and crazy character defects that are plaguing my once sweet little baby.
He throws tantrums, he bites, and hits (ME) his brother and I wont' have it, so rather then get CPS called on me, I have been locking him in his room.  Social praise is the number 1 motivator for Jackson bad attention is attention, so making him stay alone for 3 minutes is what I have chosen for punishment.  3 minutes is all I can handle because of the blood curdling scream that he has come up with in defiance of his "Time Out", I am almost certain he doesn't even take a breath.

Last week, my brilliant husband and I decided to take the kids to a new restaurant in town,  a burger place, order at the counter and they bring to your table.  We take the kids in have all their "stuff" to keep them happy in restaurants that all the time works and makes them happy whenever we have gone to restaurants before.  So we order our food, my husband gets our drinks we are patiently sitting there for about 2 minutes, and out of nowhere, (and I mean there was absolutely no reason for it) comes this tantrum of epic proportions.  2 sodas were pushed off of the table and a bowl of salsa went flying into the wall.  Did I mention the restaurant had only been open for 3 days.  So my husband, who is a drama queen in his own right says "I'm so embarrassed we have to leave" .  Meanwhile the 2 year old is bucking and throwing himself onto the table and trying to get out of the booth.  So I get the kids and we leave.  Out in the parking lot Jackson does this thing to his shoulder blades to make himself slick so I can't get a good grip on him as he is kicking and screaming and trying to get out of my arms.  I have the Autistic one getting upset and holding onto my dress so we can walk through the parking lot without getting hit by a car. (My husband is busy getting the salsa off of his shirt and carrying the diaper bag)    Jackson's thrashing about has made it necessary for me to put him down and then he throws himself down on the asphalt, so the only way I can get a good hold of him is by the neck of the back of his shirt with one hand and the other hand at the bottom of his shorts.  Probably looks like I am going to ram his head into the side of my car when we finally get there.  Now this event did not go unnoticed by a couple people who told me that I was terrible for carrying him that way (well Jackwagon if you could do it better, BRING IT ON!)
As I have them both in the car, here comes my husband leisurely strolling out of restaurant and telling me how embarrassed he is for what happened.  Seriously????!!!  There were no words or actions that would keep me out of jail I could say, except "Where is the food?"  ..............
Rebecca 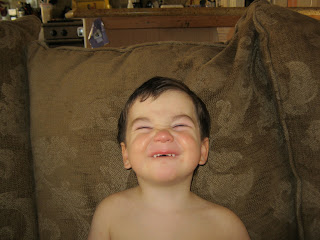 Posted by RealMomofOC at 5:14 PM