The Drama Queen that moved in

This week my 2 kids have had a bit of a tummy bug. A little diarrhea and whining 2-3 days for my 4 year old and he snapped right out of it.  My 2 year old started it Thursday evening and it unfortunately hit him a little harder than the 4 year old.  The first day was icky and 2nd day but he was not bad, so yesterday we decided to take the kids to the beach.   His poop was fairly solid in the morning before we left for the beach, so we decided it shouldn't be a problem.

We arrived at the beach with 1/2 of the belongings of our home, like people do when they go to the beach with toddlers.  Unload down at the sand, and I was sitting in the waters edge building sand castles and here comes Jackson the 2 year old strutting down the beach.  He came and sat in my lap and I felt warm and wet which as a mom coming out of a child's bum you already know it's not going to be good.  So I stand him up and he has pooh running down his legs (and also now on mine), and up the back and out of the front of the diaper. AT THE BEACH, IN THE SAND.  So I ask my husband to lay a towel down so I can try and clean this up.  I am now going to affectionately refer to my concrete form work construction foreman roughneck husband as " Drama Queen".  The Drama Queen starts his "Oh My God, that is disgusting!  What are "we" going to do? (LIKE HE IS ACTUALLY GOING TO HELP),   I bet you don't have a change of clothes (since I've never left the house since they were born without a change of clothes this is one of the statements that makes me want to rub the diaper in his face), oh no, it got on the towel, oh my god it's everywhere, I'm so embarrassed, Oh it's all over you too..... and on and on he goes.  It cracks me up as well as irritates the shit out of me,  because anytime and every time there is a vomit moment in our house he does zero to assist in the situation except to raise the level of drama.  He pisses off the kids more than they already are, just because they are sick.  He really is an Ass hat when it comes to the kids and them being ill.

Jackson was not acting ill, I showered him off, changed his clothes and he played in the sand for a couple of hours running back down the beach.

After we got home that afternoon, everything seemed fine, no blow outs, everyone napped and had dinner and baths, and the boys were on my bed watching Toy Story, my husband was in heaven because UFC was on and I cooked dinner and the kids went to sleep, and I took the dogs for a run, so he had some peace and quiet.  The weather was amazing yesterday and last night the kind of night you live in Southern California for.  I got home from a run and put Franklin in his bed,  and since Jackson had been sick I left him in my bed while I took a shower.  I got in bed with Jackson in there, and said, I'll read a little and then take him to bed, who doesn't love a little cuddle time with a 2 year old??? 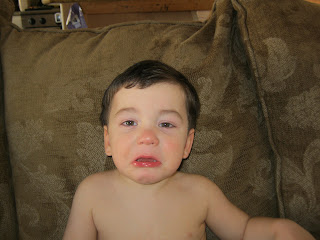 I don't know what happened, but I woke up and Jackson was screaming crying, and just like the exorcist his head spun and here comes the projectile vomiting that was like the scene of the movie "stand by me" during the pie eating contest  but I seemed to be the target, and he got almost 100% because he covered the majority of my torso.  So I get him off me put him on the floor, and in comes the Drama Queen screaming like a little girl that saw a spider, "O holy mother of God, what the hell happened?  What's wrong with him?  Why is he throwing up?  Are you going to the doctor?  AHHHHH, I cleaned up Jackson and stripped my bed and jumped in the shower.  In the 2 minutes I was trying to rinse myself off from the bodily fluids all over me, then here goes the Drama Queen again, "Rebecca, he's shitting, he's shitting, it's everywhere I don't know what to do".  Unbelievable.  I am out of the shower with a towel on me.   I have hardwood floor in my whole house, and when I saw Jackson standing in a puddle of his own pooh on my bedroom floor (I was so happy I didn't give in to my husband and mother in law about putting carpet in the bedroom)  and my husband standing there flapping his arms screaming like a 7 year old princess girl that saw a cockroach.  I picked Jackson up and ran into his bathroom and took off his full diaper of pooh that went everywhere because I can't control a 2 year old tantrum and a diaper full of fluids.  So Queenie is behind me "ahhhh how did the poooh get all over the place...... and on and on with his plethora of dramatic statements but not an ounce of help.  Hey, ASSHAT how about , bring me towels and a trash bag, can you stop with the little girl behavior and step into being a dad for 1 minute.  Get all of the friggin' towels in the house, or take the baby, but if you're gonna cry like a little girl and not offer a bit of assitance, I'm going to have to punch you in the eye.


So after stripping beds, showering (again), bathing the baby, all the crying has woken Franklin up, which if you are familiar with Autism we are now officially screwed for the night.  And once again here comes Queenie "Oh My God, Franklin is up too?"  "Holy mother of God", "Well I guess I'm getting no sleep tonight", "Are you shittin' me, this is great, how does this happen".  Again, all the comments I can hear from the other room, so finally I snapped.  "If you are going to bitch and complain about sick kids and not do anything to help, please go stay at a hotel, because the kids are not going to accommodate you tonight".  That finally shut the peanut gallery up for awhile.   I got Jackson asleep and then took Franklin into his bed to put him down he was obviously exhausted, and while I was coaxing the boy back to sleep which with Autism is an art form when they have been woken up or wake up in the middle of the night.  Once again I hear Queenie crying in the den.  Jackson's awake, what should I do???   I said nothing.  Hopefully the 7 year old girl personality side of my husband will leave tonight and he will come back and figure out what to do with the 2 year old.  Thankfully getting Franklin was to sleep was amazingly simple, and I was able to get Jackson calmed down and into a good sound sleep.  But not without an onslaught of questions from the 7 year old drama queen (AKA my husband).  What should we do?  (Uh, go to sleep), Should we take him to the hospital?  (And by "we" you mean "me" right?)  We can't go to the beach tomorrow, damn the weather is going to be awesome (Really Einstein do you think I want to go over our social calendar at 2am?)

There are things about me in the domestic department that can more than likely be improved.  I could probably be a little tidier, I could be more organized and I could procrastinate less.  But I think after last night that I gathered the strength and patience to let Drama Queen exist another day was above and beyond any matrimonial duty ever.  And he may have to overlook the fact that sometimes I forget a load of laundry that has been in the washer for 3 days if I can over look the fact that he turns into a 7 year old princess in the face of our kids illnesses.