Are your kids Common? Why be okay with Common Core?

I'm still pretty new to the school system, and frankly when my kids were diagnosed with autism, that is such a deep ocean to wade through that Common Core meant nothing to me, when I was just trying to get my kids into proper placement with their developmental disabilities.  But now that academics are coming into play and I'm learning more and the piss poor roll out of Common Core, I'm pretty disgusted with the rhetoric and lies that are being fed to us.  Our school tried to feed us pizza with the lecture and a video about how great common core is, while they answered no questions and actually had no facts backing up their claims that Common Core is great.

But as I sit here now with a 2nd grader and Kindergartner who have extraordinary minds in their own ways, I'm puzzled as to why those in the state and school system are insisting that STANDARDIZED testing is effective and needed.......wait, what????  We have always had testing, but now the NEW common core testing is computerized, and different, and supposedly better.  What they are missing and the questions they refuse to answer when you go to "Family  Night" Common Core meetings are that there is no RESEARCH to back up their claims that this is better.  What is happening is that for the next 10 years or so to gather data - DATA ON YOUR CHILDREN AND FAMILY - on their testing and learning, your kids are going to be guinea pigs on this research, and the BILLIONS OF DOLLARS spent on implementing this less than stellar set of standards is going to effectively leave us with a generation of kids that were in a lot of states taught with LOWER standards than what Common Core is bringing to the table.  As you hear phrases "drilling deeper", "collaborative", and "no more bubble fill in", know that all of that is rhetoric that is scripted to keep you from knowing that at least in California the new Common Core State Standards are MUCH lower than that of what we used to have.

Now I did not have children in school with the prior standards, however, I have 10 nieces and nephews that with what we are trying to be sold as inferior set of standards ALL are in UNIVERSITIES.  We even have a lawyer out of the bunch that passed the state bar on his first try.  We have one in medical school, one at Johns Hopkins studying BioChemistry, one at TCU about to graduate with a Communications degree,  another niece just passed her state exam and is a nurse, and a nephew in his 2nd year at USC,  one just graduated from Purdue, and 2 that are still in high school and one of those just got into San Diego State University.  All in all we have no academic slouches out of the 10 kids I'm talking about. Why is that??  Well I'm going to go out on a limb and say its because their parents gave a shit about what they were learning and doing and were involved in everything about their education and took that responsibility of parenting SERIOUSLY!  So I push back and say.............show me the kids that are inferior - 9 out of 10 in college.  That's no joke.  Where is their data?

Common Core is no one's fault, but it's all of our faults.  It was written in 2009 secretly with no parent or teacher input.  It was passed during the great recession of 2008, when the state coffers were empty.  The Federal government (which if you read the Constitution, the fore fathers thought that education should belong to the state and local governments) basically offered the states money if they implemented this set of "lower" standards.    It was passed in 2009, and implementation was to start in 2013-2014, and the full roll out in 2014-2015.  Last year there was practice testing, which parents did not get to see before or after, and there supposedly were not any results (I CALL BULLSHIT ON THAT).

Now it's full implementation, but I find it hilarious, and that there are not full set of curriculum or text books, and language arts.  There is going to be a set of testing this year again, which is said that parents will get to see results 6-8 weeks after the tests are complete.  Parents will NOT get to see what the contents of the test are, and that bothers me, and it should bother you.  How as a family as a parent are you to help prepare you child for testing, which is difficult.

So this set of standards that the states took on and basically sold your kids life out for 30 pieces of silver.  They states wouldn't get federal money unless they agreed to this set of "standards".

I have attended several "common core" meetings at the Department of Education and for the last 2 years at our school, and our school district has some ridiculous video up on their website "Door To The Core", which half the time doesn't work and when it's up, it basically is full of propaganda and rhetoric and no facts.

So here as a parent, I'm asking you parents.  WHY ARE YOU NOT SCREAMING FROM THE ROOF TOPS?  Don't use my kids as a guinea pig.

Why are we not demanding the RESEARCH used in writing these standard and showing how they are proven to be effective?  I mean really, if the "educators" argument is that "No Child Left Behind" was a failure, and my family has 9 out of 10 kids in UNIVERSITIES, that is DATA that shows it's not a failure in my eyes.  Stay with me here, if there are "educators" stating what a failure that was and that no one was learning because those weren't proven set of standards ---- then WHY FOR THE LOVE OF GOD are we accepting that there is NO RESEARCH OR PROOF THAT THIS NEW SET OF STANDARDS IS EFFECTIVE?????

Now my kids have autism, and one of my children is exception in the academic department, in fact his mind is extraordinary.  But this Common Core BULLSHIT of explaining his 12 step way of getting to a simple answer, will make him fail.  His EXTRAORDINARY mind does not work that way, it in no way makes him a dummy - or as Arne Duncan, the education Czar says about us as parents and common core "Common Core has shown the white suburban soccer mom that their children aren't as brilliant as they thought".  My blood pressure spiked and I wanted to punch his pompous rhetoric spewing ass right in the mouth.  He is making statements with a broad stroke of a HUGE brush, yet his standards that he is touting around to control the minds of our kids are not proven to work......so Mr. Duncan, I think the Common Core Standards are now showing that YOU sir are not as BRILLIANT AS YOU THINK.

I'm very concerned as a parent and hurt that the government over reach is making a big assumptions about us as parents, that they know better, that they insult our intelligence.  There are a couple ways to stop this HUGE GOVERNMENT MACHINE, and that is to OPT OUT OF THE TESTING.  A company named Pearson is making Hundreds of Millions of dollars administering the tests of our kids, mining data, and selling technology to the schools.  Each time a student is tested the school district pays Pearson roughly $31 dollars per student, and last year 47% of 10th graders failed the test and were rested as much as 4 times.  So about 1 million dollars for testing ON ONE GRADE LEVEL IN ONE DISTRICT.  Isn't that staggering?  Wouldn't that money be better spent, lowering class sizes?  Paying teachers more?  Having decently constructed schools?  Having special educations students with appropriate resources to meet their needs?

So as I do more research and listen to the educators "tell" me, what is great about Common Core, yet they have NOT and will not and has skated every question I've thrown at them.  There is no research that these standards work, there is no mention that these standards in California are lower than what we used to have in our system.  The fact that the roll out and implementation has been such a cluster fuck of incompetence has to wake up the masses and concern them.

If you haven't done your research or need help wading through this pool of cess that is now in front of you, I will be happy to help you.

But if you have any intention of stopping this machine, you need to follow the money, and the money is in the standardized testing, that is so clouded and hidden from parents - but there is millions and millions of dollars being made in this testing.  You have to opt out, you can't opt out of the standards, but the testing can be opted out of and you won't be contributing to the machine and feeding it money. 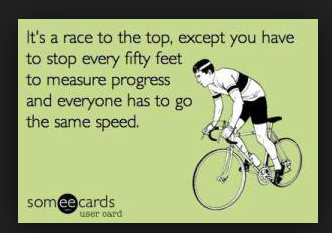 Posted by RealMomofOC at 8:46 AM