On September 1st, I dropped my kid off at school and was elated, it was the 4th day of the new school year, and I was thrilled to have some time for myself, after a very long summer with my kids who have autism.  I was running the Disneyland Marathon that weekend so I took a quick trip to Anaheim to pick up my race packet.  I was 30 miles from my kids and their school.  I was in the basement of the Disneyland Hotel when I my cell phone rang,  it was my son's aide, very upset, he had been in an accident at school, a file cabinet had fallen down on his head and they were calling an ambulance for
him.

I was nauseous,  I am never that far from my kids, I couldn't get a straight story from anyone on what had happened.  I had my father in law en route to the school, and I had called another parent in the class who we were close with that could get to school before I could to see what had actually happened. 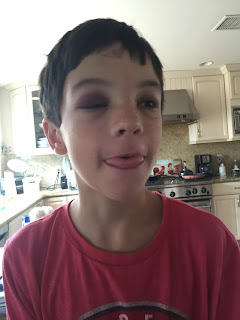 I got a call back from my friend who I asked to go see what happened at school because I was still 30 minutes away.  She called me back hysterical and devastated, because it was her child who caused the accident.  Well actually know it wasn't her child that caused the accident, it was every adult that works in school administration that caused this to happen.   Every arrogant school administrator that thinks they know better than anyone that is a parent.  (I have anger issues where this is involved).

I finally made it to the hospital, the longest ride of my life.  My son was lying on a gurney visually shaken up with a large mark on his forehead.  He is the most vulnerable kid in our school.  He is obviously severely autistic, non verbal, so there is no way for the doctors to assess him.  It's complete horse shit as far as I'm concerned, once you say your kid is non-verbal, and severe, you see the level of care immediately change.  The medical staff thinks they can do the minimal amount of tests and scans etc, "because of his condition there is no way to get an accurate mapping of any cognitive abilities".  It's absolutely maddening.

After 2 nights in ICU and 2 brain CT scans, it was determined that he suffered a grade 2 concussion.  Now I knew very little about the long term effects of concussions and traumatic brain injuries.  I learned that concussion are devastating, life changing, and very serious.  I thought they were things that happened to athletes, not special needs kids you drop off at school.  I thought they happened to adults.  You are more likely to get your 2nd concussion within 6 months of your first one - because once that "egg is cracked" it will take half the bump on the head to do twice the damage.

In the 3 months since the accident, life has gone wonky.  We have worked so aggressively hard at working on his autism and helping him get out of the deep hole of autism where he was aggressive and miserable most of the time.  We did years of therapies, diets, medications, supplements, treatments, and spent tens of thousands of dollars.  We had even sued the school district because his previous school he was badly mistreated, neglected, and unsafe and was allowed to get out of the building and to the street multiple times.

After 1 year in his new school, he was doing so amazing.  He was starting to actually achieve goals that had been set as a kindergartner - we had no tantrums for almost a year, he was making communication progress that was thrilling to all of us.  He was in a great place and we were full of hope and comforted that he was with people that wanted him to do well, and BELIEVED in him.  It was great.

We have had may doctor appointments and are trying to manage the concussion, injury, trauma, and autism and I just see the backslide happening, and there is nothing that I can see that we aren't doing.  All of the work that we have done for years has been lost.  We are back to no sleeping, no eating, aggressive, scattered, and he clearly suffers from debilitating headaches, and sensory sensitivities.  So his life that was already 1000 times more challenging than anyone's on his best day is now painfully more so.  I have this child that is not the same child I dropped off at school on September 1st, I cry almost everyday as I see his struggle, and pain and feel so powerless over how to help my child.  I remain steadfast in my resolve to do what is best for him, and get him to a better, healthy more comfortable place.

This has changed our family and me, our circle has gotten smaller, some people have been amazing friends and it's just warmed and renewed my hope in humanity, and some people who I thought were our friends have pretty much given my child the finger, because my concern for my childs safety is considered offensive.  Which everyone is entitled to their opinion - and you know what they say about opinions......

I am thankful that my child wasn't killed or more seriously injured.  I know that those were possibilities of what could have happened.  This really could have been a tragic event.  I am learning from it, I am moving forward with demanding that the schools are safe for all kids, this should NEVER have been able to happen.  The attitude of the administration at our district has been disgusting at best.

I am praying for solutions, and help that my child recover from this traumatic brain injury and that we get him back to a place where we can start to move forward.  I'm open to anything that you've got.

Posted by RealMomofOC at 9:38 PM