I am a runner, I don't know how it happened, but I now run.  I race, I trot, I walk, but I finish.  I'm a runner.  I was out on my long run yesterday when I got a news alert on my phone of the Boston Marathon bombing.  I got stuck in a down pour and ran home as fast as my chubby Italian legs would take me.  All I could hear in my head was Ellen DeGeneres voice as Dory in Finding Nemo "Just Keep Swimming". I just couldn't imagine that people were bombed when all they wanted was to watch friends and family members finish the BOSTON FRIGGIN MARATHON, the most recognized race in the world.  The runners wanted to get their medals have an awesome meal/party with their community and go home.  They were robbed of that, and that sucks.  They were bombed by a crack pot for some ridiculous heinous reason who thinks killing and hurting innocent people is going to serve their psychotic purpose.

We need to keep running, we "Just Keep Running".  It is the thing that a lot of us do just to escape the reality of a world full of psycho nut jobs that think blowing people us is a sport in itself.  I know I run to keep the filter from my brain to my mouth in check.  It keeps me from telling a lot of people what i REALLY think.  The crazy lunatics that think innocent people deserve to be maimed and killed, the crazy nut jobs that hate us just because we are American, or white, or black, or a runner, or a woman, or a child, or just for being PEOPLE.  The world is full of horribly psychotic lunatics.  We won't stop them from doing the most horrible things imaginable because we are too worried about hurting some one's feelings, so we strip search and pat down 8 year old boys, and 92 year old blue haired ladies to make a pathetic statement that our safety is the real concern (HUGE EYE ROLL).

We need to as a community, of runners, and just common sense people.  We need to be aware of our surroundings, we need to report suspicious activity, we are no longer a society that can tuck it's head in the sand, and think that all people are good.  Unfortunately there are crazy psychotic lunatics whose soul mission is to do us harm, and that is sad.  However, once that fact is accepted it is very empowering. 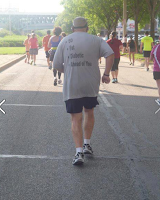 This bombing was the worst type of scenario, it was an attack that was completely unpreventable, and meant to just hurt or kill as many as possible. A large public venue and event that is world known and people from all over the world participate.  It was meant strictly to paralyze us with fear, and hurt us irreparably.  THAT IS UNACCEPTABLE we can not let the mean crazy people of the world win.  It is tragic, it affected a community of people that I have begun to become enthralled with, and I have actually joined, because I RUN.  These are exceptional people that will run slow with you to train, help you run faster, pull you across a finish line when you don't think you can go another step.  It is a community of people that runs and raises funds for charities, it is my favorite part of community because there is a common bond and fellowship that doesn't exist in many arenas.  So for that I am horribly broken hearted that pure evil has stuck it's ugly face into such a "safe place".

Posted by RealMomofOC at 7:42 AM